The Long & the Short of it: Cheltenham ‘Championship’ Races 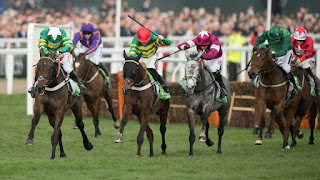 The four main ‘championship’ races at the Cheltenham Festival – the Cheltenham Gold Cup, the Champion Hurdle, the Queen Mother Champion Chase and the Stayers’ Hurdle – represent the pinnacle of achievement in each division of National Hunt racing. They have often been won by the out-and-out champions of the sport, who were ‘expected’ to win, and did so, at correspondingly short odds. Every now and again, though, they throw up highly unlikely winners, who defy monstrous odds to have their names carved on one of the hallowed trophies.


Legendary Irish steeplechaser Arkle, who won the Cheltenham Gold Cup three times in a row, in 1964, 1965 and 1966, has the distinction of being the shortest-priced winner of the most prestigious race at the Cheltenham Festival. On his third, and final, attempt, in 1966, such was his apparent superiority over his three rivals that he was sent off at eyewateringly prohibitive odds of 1/10.


By contrast, in 1990, Norton’s Coin, one of just three horses trained by Carmarthen permit holder Sirrell Griffiths, was the longest-priced winner in the history of the Cheltenham Gold Cup. ‘More a candidate for last than first’, at least according to the official Cheltenham racecard on the day, the nine-year-old defied odds of 100/1 to beat Toby Tobias and defending champion Desert by three-quarters of a length and four lengths, breaking the course record in the process.


In 1954, Sir Ken, trained by Willie Stephenson, became only the second horse – after Hatton’s Grace – to win the Champion Hurdle three times a row. He started favourite on all three occasions but, in 1953, he was sent off at 2/5, making him the shortest-priced winner in the history of the race. At the other end of the scale, Kirriemuir, trained by Fulke Walwyn, popped up at 50/1 in 1965, as did Beech Road, trained by Toby Balding, in 1989; they share the spoils as the joint-longest-priced winners.


In the Queen Mother Champion Chase, the supremely gifted Flyingbolt, a stable companion of Arkle, was returned at odds of 1/5 after putting five rivals to the word in 1966. In 1980, Chinrullah was first past the post, but later controversially disqualified after failing a post-race urine test, in favour of Another Dolly, trained by Fred Rimmell. Returned at 33/1, Another Dolly is officially the longest-priced winner of the race.