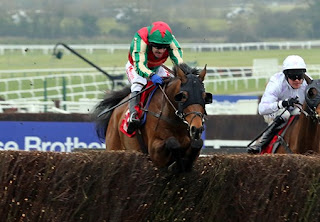 In the absence of defending champion Faugheen, sidelined by injury, the 8-year-old mare Annie Power, also owned by Susannah Ricci, was supplemented for the race at a cost of £20,000 to connections. The move proved a shrewd one, because Annie Power started 5/2 favourite and, having made most of the running, drew clear in the closing stages to beat My Tent Or Yours by 4½ lengths. Nichols Canyon, trained, like the winner, by Willie Mullins, finished a head back in third.


Sprinter Sacre, a dominant winner of the race in 2013, but pulled-up in 2015 after missing the whole of 2014, returned to something like his best with a convincing 3½-length win over odds-on favourite Un De Sceaux. Special Tiara finished third, just a further head away, but previous winners Dodging Bullets and Sire De Grugy were never really involved in the race and finished seventh and eighth respectably.


Thistlecrack, trained by Colin Tizzard and ridden by Tom Scudamore, was all the rage on his first appearance in the World Hurdle, newly sponsored by Ryanair, starting even money favourite. The market confidence wasn’t misplaced, with the 8-year-old taking the lead, while still on the bit, at the second last and drawing away in the closing stages to win, impressively, by 7 lengths. Alpha Des Obeaux finished second and Bobs Worth third, a further 22 lengths away, but neither held even the remotest chance of beating the effortless winner.


Cue Card, chasing a £1 million bonus after winning the Betfair Chase at Haydock and the King George VI Chase at Kempton, had just taken the lead when crashing out at the third last fence. Favourite Don Cossack and Djakadam, runner-up in 2015, were left to fight out the finish and it was the former, trained by Gordon Elliot and ridden by Bryan Copper, who took command at the final fence and was pushed out to win by 4½ lengths.