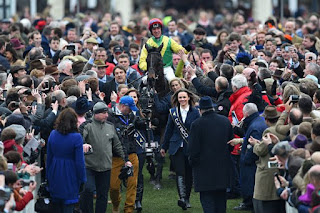 
The 2017 Champion Hurdle featured a 1-2 for trainer Nicky Henderson and owner John P. McManus, with 5/1 second favourite Buveir D’Air drawing clear in the closing stages to beat 16/1 chance My Tent Or Yours – who was finishing second for the third time – by 4½ lengths. Petit Mouchoir kept on at one pace to finish third, a further 3 lengths away, while favourite Yanworth finished a never dangerous seventh, only to be disqualified later after a banned substance was found in his system.


Douvan, unbeaten in 13 starts over hurdles and fences since joining Willie Mullins and already twice a winner at the Cheltenham Festival, was sent off at prohibitive odds of 2/9 to complete what appeared, at least on paper, to be an easy task. However, the 7-year-old found little in the closing stages, trailing in seventh of the nine finishers and was found to be lame after the race. Special Tiara, third in 2015 and 2016, took advantage, holding on, all out, to beat Fox Norton by a head, with Sir Valentino 6 lengths away in third.


The 2017 Stayers’ Hurdle, sponsored by Sun Bets and reverting to the title by which it was known from 1972 onwards, produced a shock result. Unowhatimeanharry, trained by Harry Fry and ridden by Noel Fehily, had won 8-8 over hurdles since joining the Dorset handler and was sent off hot favourite, at 5/6, to maintain his unbeaten record for the yard. The 9-year-old held every chance jumping the last flight, but could find no extra in the closing stages and finish third, beaten 4¼ lengths. Nichols Canyon, trained by Willie Mullins and ridden by Ruby Walsh, eventually prevailed, by three-quarters of a length, from gallant runner-up Lil Rockerfeller.


Djakadam, runner-up in 2015 and 2016, started 3/1 favourite to win the Cheltenham showpiece but, having travelled well for most of the way, made a mistake at the second last when just in the lead, faded on the run-in to finish fourth, beaten 3¼ lengths. Meanwhile, Sizing John, trained by Jessica Harrington and ridden by Robbie Power powered home to beat Minella Rocco by 2¾ lengths, with second favourite Native River a further short head behind in third. Cue Card fell at the third last fence for the second year in a row.
at July 18, 2019 No comments: