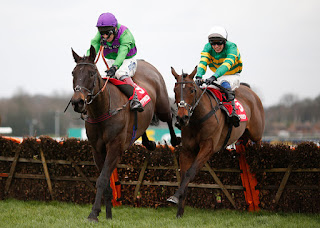 Hurdle races are always a thrill at the Cheltenham Festival. Observers love the thrill of watching varying levels of skill give racehorses advantage (or its opposite) as they combine speed and power to navigate the course.


That is exactly what the Pertemps Final offers on the third day of the Festival- a thrill of power and pace. The third-grade race sees racehorses of five years and above compete over a distance of 4828 metres (3 mi) on the turf layered New Course at Cheltenham. The horses are handicapped to achieve a better balance as they seek to perform best over a path dotted with twelve hurdle obstacles.


It is a fairly aged race having been first run in 1974. It has been held at every Cheltenham festival since then with the exception of the foot-and-mouth ill-fated 2001. Seasoned sponsor Coral (now of Coral Cup) was a long time sponsor until 1993. Pertemps, the current sponsor, has had the deal since 2002. The sponsorship offers a purse of around £90,000 with the winner taking more than half of it.

The 2018 edition is this race’s first ever edition as a graded race. It was formerly run as a Listed race, but continuous improvement in competition has earned it a promotion.


Horses do not just register for the Pertemps Final. Rather, they go through a rigorous series of qualifiers in the five months leading up to the March festival.


This is one of the races with the evenest distribution of winners across the age brackets. Six, seven, eight andnine-year-olds are the most prolific winners. The record holder, however, had a two-digit age. Willie Wumpkins took first place in 1979, 80 and 81 to set a record that stands to date. The horse was ridden by amateur jockey Jim Wilson and trained by Jane Pilkington on all three occasions. Wilson remains the top jockey in the race, but Jane was overtaken by Jonjo O’ Neill who achieved a
fourth win as a trainer in 2013.
at September 01, 2020 No comments: