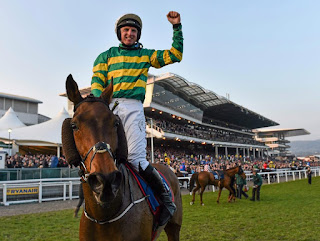 The Fulke Walwyn Challenge Cup is an ungraded race run on the third day of the Cheltenham Festival. It is a competition that brings together horses of a minimum age of five years with
amateur riders guiding them through a distance of 5,130 metres (3mi 1 furlongs). The lengthy distance has 19 fences placed strategically for the horses to manoeuvre over the left-handed turf New Course.

The races name pays tribute to two people. Kim Muir is a name in honour of a man who died in the Second World War. The name was picked by Mrs. Evan Williams, Kim Muir’s brother and was initially listed as Kim Muir Riders’ Steeplechase. The inaugural event was run in 1946 and won by eight-year-old Astrometer.

Fulke’s name was added to the race in 1991. Fulke was a massive personality at Cheltenham with a total of 211 victories, including 41 at the March festival. Adrian Maguire rode 11-year-old. Martin Pipe-trained Omerta to victory in the 1991 event.

Despite not having a current sponsor, the race has at times attracted a purse of up to £65,000.

There have been no record-setting horses in this race in recent years. The standing joint-record of two wins was set back in 1986. The jockeys’ record, however, is pretty recent. Jamie Codd (2009, 2011, 2015, and 2016) has been dominant over the last close to a decade and earned himself a record of four wins in the process.

Horses of advanced ages tend to perform better in this one. Since its inception, no five-year-old horse has finished in first place. Six-year-olds have won just twice. Horses of between seven and ten years have dominated the race with most wins. There have been just two wins recorded by 12 year-olds, one in 1981 and the other in 2015. Looks like it might be some time before that happens again, but we all know horseracing is never that easy to call!!
at May 08, 2017 No comments: