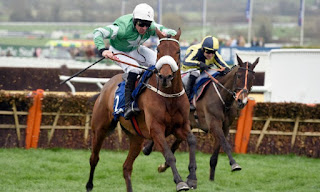 At the time of his retirement, in April, 2015, Sir Anthony Peter ‘A.P.’ McCoy had ridden 4,348 winners under National Hunt rules, including 31 at the Cheltenham Festival. His Festival haul included the Champion Hurdle three times, the Cheltenham Gold Cup twice and the Queen Mother Champion. However, the former 20-time Champion Jockey believes, and few would argue, that he enjoyed his finest hour in the Festival Trophy Handicap Chase – at that time, run as the William Hill Trophy Handicap Chase – on March 10, 2009.

The race was run, as it is today, over 3 miles and 80 yards on the Old Course at Prestbury Park and Mcoy rode Wichita Lineman, a 7-year-old owned by John Patrick ‘J.P.’ McManus and trained by Jonjo O’Neill. Although having just his fourth start over fences, Wichita Lineman was sent off 5/1 favourite on his handicap debut; he was hardly an unlikely winner, at least not according to the betting market, but it was the manner of his victory, from a nigh on impossible position, for which McCoy earned deserved plaudits.


After a false start, Wichita Lineman raced in mid-division, on the inside, before making a mistake at the ninth fence, and another at the tenth, which led to a reminder from McCoy heading out onto the second circuit. Only tenth or eleventh when hitting the fifteenth fence, Witchita Lineman was still making little or impression on the leaders when hitting the third last fence. However, coming down the hill, the horse rallied, under maximum pressure and, turning into the home straight, had reached sixth place.

Switched to the wide outside, he was still only third jumping the final fence, but made relentless progress up the famous Cheltenham hill, collaring Maljimar, who had led from the second last fence, in the final two strides to win by a neck. Sadly, the story does not have a happy ending; Wichita Lineman was killed in a fall at the first fence on his very next start, in the Irish Grand National at Fairyhouse the following month, but he will always be remembered as the subject of possibly the best ride ever seen at the Cheltenham Festival.
at May 17, 2020 No comments: