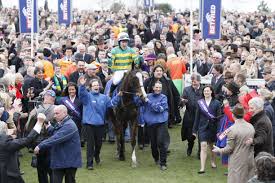 The two previous winners, Hurricane Fly and Binocular, returned for the 2012 renewal of the Champion Hurdle, with the former sent off 4/6 to make it 2-2 at the Festival. However, on good going, it was Rock On Ruby, trained by Paul Nicholls and ridden by Noel Fehily, who kept on best to beat Overturn by 3¾ lengths. Hurricane Fly could make no impression in the closing stages and finished third, a further 1¾ lengths. Officially, the winner was credited to Nicholls, but Rock On Ruby was mainly prepared at his satellite yard in Seaborough, Dorset by Harry Fry.


Just eight runners lined up for the 2012 Queen Mother Champion Chase, with defending champion Sizing Europe odds-on, at 4/5, to win again. Henry de Bromhead’s 10-year-old ran creditably, but was joined by 4/1 second favourite Finian’s Rainbow, at the final fence – bypassed following the fall of Wishfull Thinking on the first circuit – and headed in the final half a furlong, or so. Finian’s Rainbow, trained by Nicky Henderson and ridden by Barry Geraghty, prevailed by 1¼ lengths, with Big Zeb a respectable, but distant, third, 15 lengths away.


Big Buck’s, the undisputed star of the staying hurdle division, claimed a record-breaking fourth victory in the race, at the chief expense of 20/1 Voler La Vedette, who pushed him all the way to the line, before succumbing by 1¾ lengths. The victory was the sixteenth in a row over hurdles by Big Buck’s, equally the record set by Sir Ken nearly six decades earlier. Another 20/1 chance, Smad Place, finished third, 7 lengths away.


Defending champion Long Run was sent off 7/4 favourite to retain his title, ahead of 2007 and 2009 winner Kauto Star at 3/1. Kauto Star was pulled up before halfway, though, and although Long Run ran creditably he couldn’t find the same turn of foot as he had twelve months previously and eventually finished third, beaten 3 lengths. The race was won by 2011 Welsh Grand National winner, Synchronised, trained by Jonjo O’Neill and ridden by A.P. McCoy. The 8/1 chance led at the final fence and stayed on gamely to beat rallying 50/1 outsider The Giant Bolster by 2¼ lengths.