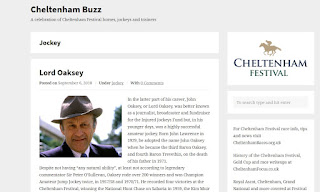 In Cheltenham Spotlight, we periodically shine a light on a Cheltenham Festival themed website or feature that really stands out from the crowd. A blog or website that offers valuable insights into this much loved UK horse racing festival, or celebrates it in some fashion worthy of informing race fans of.

Our current highlighted site is Cheltenham Buzz. This frequently updated blog features a myriad of horse, jockey, trainer and owner bios with a slant towards their performance at Cheltenham over the years. This is a really neat way of highlighting the Cheltenham Festival in such a way that is really evocative and brings the event to life.

It really does bring it all back to read up on history making horses such as Master Oats who won the Gold Cup back in 1995, and Denman who achieved the same accolade years later, and to get an insight into their career as a whole and how Cheltenham came to form part of it.  Trainers like Nigel Twiston-Davies too, who has had almost unrivalled success at the Cheltenham Festival over the course of his racing career. Or Mick Fitzgerland who rode 1000+ victories in his career, arguably none more impressive than his 14 Cheltenham Festival victories. During this surprising number of Cheltenham wins he won the Queen Mother Champion Chase on Call Equiname, and the Cheltenham Gold Cup twice.

On Cheltenham Buzz there are updates a couple of times a month, so it's always good to see who's next under the spotlight, how they are linked to other Cheltenham legends and how indeed the Cheltenham Festival came to be a core part of their story in horse racing.