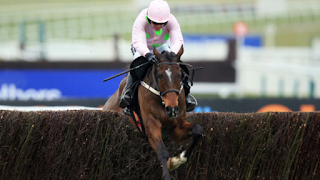 The Cheltenham Festival regularly provides the most competitive racing in the British National Hunt calendar, so short-priced, even odds-on, losers are commonplace. Even so, from time to time, the public latches on to a horse which, for whatever reason, is backed as if defeat is out of the question. Of course, it isn’t, but such horses are often forced in to short, sometimes ludicrously short, prices. ‘Following the money’ can pay dividends, but can, equally, be a total disaster.

The most obvious recent example of a Cheltenham Festival ‘flop’ was Douvan, trained by Willie Mullins, in the Queen Mother Champion Chase in 2017. In a race that has had more than its fair share of odds-on losers down the years, Douvan was sent off at prohibitive odds of 2/9 to continue his unbeaten run, which stretched back 14 races over hurdles and fences. Even so, there were still takers, including one anonymous punter who reportedly placed a bet of £100,000/£500,000 at odds of 1/5. In any event, Douvan jumped poorly, was soon outpaced and trailed in seventh of the nine finishers, beaten 11¾ lengths, behind the winner Special Tiara.


Kasbah Bliss, trained in France by Francois Doumen, was a regular at the Cheltenham Festival in the Noughties, but having been beaten in the Triumph Hurdle and twice in the Stayers’ Hurdle – or the World Hurdle, as it was known at the time – he was surprising made odds-on favourite, at 10/11, for the latter race in 2009. The previous year, on the Old Course, he had failed by just a length to overhaul Inglis Drever, but the year before that, on the New Course, he had had his stamina limitations exposed when beaten 17 lengths by the same horse. Back on the New Course in 2008, he fared no better, weakening on the run-in to finish fourth, beaten 21 lengths, behind Big Buck’s.


Another fine Irish steeplechaser, Beef Or Salmon, trained by Michael Hourigan, had already been beaten three times in the Cheltenham Gold Cup, before he lined up, as 4/1 favourite, for the 2006 renewal. On his previous attempts he had fallen at the third fence in 2003, finished fourth, beaten 3½ lengths, behind Best Mate in 2004 and been tailed off when pulled up two out behind Kicking King in 2005. However, in the absence of Best Mate, who’d won for the previous years, he was suddenly considered favourite material. He wasn’t, finishing eleventh of nineteen, beaten 19 lengths behind War Of Attrition.
at January 12, 2021