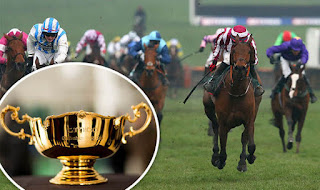 Nowadays, the Cheltenham Gold Cup is the most prestigious event in the British National Hunt calendar, second in prize money to only the Grand National – which, of course, is a handicap – and invariably attracts the crème de la crème of staying chasing talent from both sides of the Irish Sea. As reminder of its long, illustrious history, though, the Cheltenham Racecourse Executive has been offered, and accepted, the return of the original Gold Cup Trophy. The trophy, made from 22 ounces of nine carat gold, will be mounted on a plinth bearing the names of all the previous winners and reintroduced as a perpetual award from 2019 onwards.
at November 04, 2020 No comments: