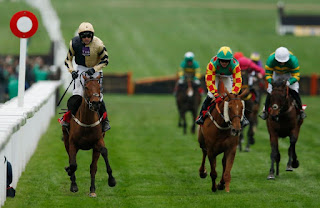 The Stayers Hurdle is one of the races that graces the third day of the increasingly popular Cheltenham Festival. This is a grade 1 race run over 12 hurdles covering a 4,828 metres (3
mi) by racehorses of at least four years of age.

Being one of the elite races, the Stayers’Hurdle is run on the left-handed, turf New Course at the Cheltenham venue. It is the main attraction on the day as horses and jockeys compete to emerge top
and take home over half of the close to £275,000 purse on offer.

This race has been around for a little over a century. The first edition was held in 1912 over the same
distance. Back then, the first place finisher took home £100. That was six-year-old Aftermath who was ridden by champion jockey J. W. Pullen. The purse has increased steadily over time, as has its popularity among both punters and thrill viewers.

The Stayers’ Hurdle is one race that has experienced regular interruptions during its time. The first interruption was during the First World War. It was then dropped from the festival schedule for seven years between 1928 and 1945, then again in the years around then due to frost and flooding.

Fans have however rallied to have it brought back at every single turn. There has been a great convenience since 1970, with the only skipped edition being that of 2001 amid a foot and mouth
disease scare.

The name has also changed severally during its time, most notably the 2005 renaming to World Hurdle when Ladbrokes came in as race sponsors. It reverted back to its original name in 2015 when
sponsorship changed hands.

Paul Nicholls is the leading trainer with four wins which came between 2009 and 2012. All these were swept by Big Bucks who was ridden by the golden jockey Ruby Walsh. Walsh also went on to win the 2017 edition atop Willie Mullins-trained Nichols Canyon to set a record of five jockey wins.
at March 10, 2017