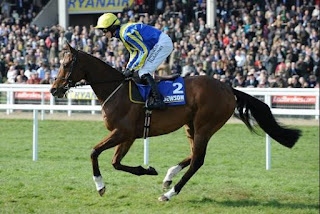 The Golden Miller is one of the races that
make up the third day of the Cheltenham festival. As the festival progresses towards the Friday climax, more and more challenging races come up to build up the tempo. This race is run by horses of five years and above over a course of
4,023 meters (2 mi 4 furlongs) in a chase style that included seventeen fence obstacles. This is one of the few races that take place on the turf,
left-handed New Course of the famed Great Britain venue.


It often takes up a different prefix to denotethe current sponsor. As of 2017, it was known as the JLT Novices’ Chase. Insurance brokers JLT has been the most stable sponsor of this race.


Seven-year-old horses do love the Golden Miller. Horses of this age have won a whopping five of its seven editions since Tony McCoy ridden Noble Prince won the inaugural event in 2011.


This has also been a fertile hunting ground for the jockey-trainer partnership of Ruby Walsh and Willi Mullins. Mullins-trained Sir Des Champs won the second edition ridden by Davy Russell. The trainer was however not able to grab first honours for the next two years. He partnered with Ruby Walsh in 2015 and it has been victory after victory since then. Ruby rode Vautour to victory in 2016, Black Hercules in 2016 and Yorkhill in 2017 to give the duo a head start in the race’s records well in its
early years.


No single horse has been able to win the race twice. This may be as a result of the advanced age of horses that have always won the competition.
at October 12, 2017