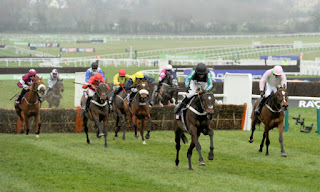 The Supreme Novices’ Hurdle is the very first race run at every Cheltenham event. It started out as a curtain raiser event, but the novices have proven to be more and more skilled over the years, eventually making it one of the festival’s signature races.

The grade one competition race covers 3298 metres (2 mi furlong) over which racing horses go over eight challenging hurdles. Participating horses have to be at least four years old.

The race has had its current name since 1978 when it was renamed from Lloyds Bank Champion Novices Hurdle. It’s very first title was the Gloucestershire Hurdle, adopted when it was first introduced in 1946.

Thousands of onlookers gather every year to witness this first event of a hugely popular horserace.
It has become synonymous with the Cheltenham Roar,’ a wild cheer from fans every time the race kicks off. The success of the festival can often be gauged from the enthusiasm of the crowd when they make this signature cheer.


The Old Course has always been the surface for this hurdle race that is among amateur National Hunt premier events. The course has taken a galloping every year since 1946, with the exception of 1947 when the event was abandoned due to extreme snowing.

Trainer Willie Mullins has dominated the race in the last two decades, with his horses taking five wins over that period to make him the leading trainer since 1972. His case has been helped by jockey Ruby Walsh who swept three consecutive wins between 2013 and 2015. Walsh himself is the leading jockey, having recorded his own five wins between 2006 and 2015.

The race appears to mostly favour five, six and seven-year-old horses. No four-year-old horse has taken the first position since the turn of the 21st century, while 2002 winner Like-A-Butterfly (8 years) was the only winner older than seven years since 1966.
at May 14, 2018