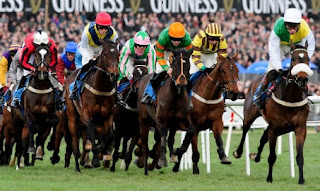 The Festival Trophy is among the curtain-raising races taking place on the first day of every event of the annual Cheltenham festival. It combines both skill and amateur practice to set the pace for more intense events that follow in the race fixtures as competitions build up with the aim of a climax in the Gold Cup.

The race falls in the third grade of chase races on the Great Britain National Hunt calendar and admits horses of age five and above. The participating horses run on a handicap seeking to come out best over a 5,029 meter (3 mi 1 furlong) distance. The path on the left-handed turf course is dotted with 21 fence obstacles, making it one of the toughest races at the festival.

It takes more than just speed to win the Festival Trophy. With a long distance to cover, not-so-young
horses to ride and a more than generous number of obstacles, riders have to exploit every advantage at every point in the race. There are points where speed counts, while in others the braking is what matters most.

The reward for the gruelling task is a largely satisfied and cheerful crowd which often puts all
else aside to watch the race from start to finish. A generous purse of £105,000 from event sponsor Ultima was on offer in the most recent event, of which the winner took a share of close to £ 60,000.

The tough race conditions  prepare horses to take part in the equally challenging Grand National later on. Rough Quest, Royal Tan, and Team Spirit are some of the notable Festival Trophy winners that have gone on to win the National Hunt.