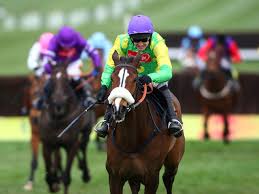 The 2007 Champion Hurdle produced a minor shock, with 16/1 chance Sublimity, trained by John Carr in Co. Kildare and ridden by Philip Carberry, lowering the colours of reigning champion Brave Inca in emphatic style. Under a waiting ride, Sublimity was produced at the last flight and was soon well in command, winning by 3 lengths. Favourite Detroit City, bidding to emulate 2003 winner Rooster Booster for the same connections, was never going well and trailed in sixth, beaten 18¾ lengths.


Defending champion Newmill was back again, at a much shorter price than the previous year but, having helped to set a furious pace, was a spent force approaching the final fence, while favourite Well Chief crashed out at the just the second fence. Voy Por Ustedes, trained by Alan King and ridden by Robert Thornton, took full advantage, rallying to beat Dempsey and River City by 1½ lengths and 5 lengths, at odds of 5/1.


For the first time in six years, the Stayers’ Hurdle was missing Baracouda, the winner in 2002 and 2003 and runner-up in 2004 and 2005. In his absence, 2005 winner Inglis Drever landed the spoils, but not without a ding-dong struggle with runner-up Mighty Man, who chased the winner all the way up the hill, but was eventually beaten three-quarters of a length. Blazing Bailey finished third, another 4 lengths way, while favourite Black Jack Ketchum fell at the third flight.


The 2007 Cheltenham Gold Cup featured the first appearance in the “Blue Riband” event of Kauto Star, who’d fallen at the third when favourite for the Queen Mother Champion Chase in 2006. Sent off a hot favourite at 5/4, the 7-year-old looked poised for an emphatic victory when clouting the last, but recovered and stayed on strongly to beat Exotic Dancer by 2½ lengths. Having already won the Betfair Chase at Haydock and the King George VI Chase at Kempton, Kauto Star collected a £1 million bonus offered by betting exchange firm Betfair.