Cheltenham: The Festival and the Facts 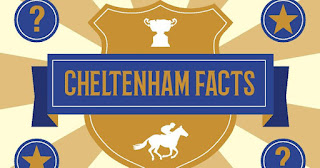 It seems like it was only yesterday that we were caught up in the thrill of the 2018 Cheltenham Festival, which experienced record breaking crowds of over a quarter of a million over the four day festival (with 70 thousand+ on Gold Cup day alone). With a Gold Cup win from the Colin Tizzard trained Native River, and odds on shot Buveur D'Air in the Champion Hurdle, there was plenty of excitement to appreciate for fans of top drawer racing.

Without a doubt the Cheltenham Roar will be of equal or higher volume during the 2019 Cheltenham Festival (starting March 12th), where the cream of the crop of racing talent will once again go head to head to see who's going to be this year's history makers. We're sure you'll be be tuning in for this unmissble four day festival and most likely having a flutter too (and who can blame you!). We'll be checking out Cheltenham tips from the experts at OLBG.com closer to the Festival start date and highlighting ones to watch. Current favourite for the showpiece event, the Gold Cup, is Presenting Percy at 3-1 (Native River is 5-1).

- The Festival is said to be worth around £100,000,000 to the Gloucestershire community

- Only seven horses have won the Cheltenham Gold Cup more than once, with Golden Miller winning the race a stunning 5 times in a row

- Dawn Run holds the honour of being the only horse ever to have won both the Champion Hurdle and Cheltenham Gold Cup.

- The most successful trainer at the event is Tim Dreaoer with five Gold Cup wins on three horses (Prince Regent, Arkle and Fort Leney).

- The 2001 Foot and Mouth disease was the only non war related reason the Cheltenham Festival has ever been called off.