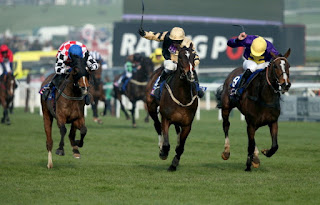 The 2015 Champion Hurdle featured an historic achievement by trainer Willie Mullins, who saddled Faugheen, Arctic Fire and Hurricane Fly to fill the first three places. Faugheen, ridden by Ruby Walsh, justified favouritism, at 4/5, keeping on well to beat Arctic Fire – the outsider of the Mullins’ trio at 20/1 – by 1½ lengths, with previous dual winner Hurricane Fly 5 lengths back in third.


Defending champion Sire De Grugy, 2013 winner Sprinter Sacre and 2011 winner Sizing Europe all lined up for the 2015 renewal, with Sprinter Sacre – who’d been beaten 3 lengths by Dodging Bullets in the Clarence House Chase at Ascot on his first run for over a year – sent off 9/4 favourite to make up for lost time. However, it was Dodging Bullets who prevailed once again, asserting close home to beat Somersby and Special Tiara by 1¼ lengths and 1¾ lengths. Sprinter Sacre was pulled up before the final fence after a shortlived effort coming down the hill.


The Stayers’ Hurdle, run, for the last time, as the Ladbrokes World Hurdle, featured 16 runners and looked a wide open affair on paper, with bookmakers betting 5/1 the field at the off. The race was won by Cole Harden, trained by Warren Greatrex and ridden by Gavin Sheehan, who made all the running and stayed on strongly up the hill to win by 3¼ lengths. The Paul Nicholls-trained pair Saphir Du Rheu and Zarkandar finished second and third, respectively.


The 8-year-old Coneygree, having just his fourth start over fences, made all the running and stayed on gamely to beat Djakadam by 1½ lengths, with Road To Riches 2 lengths further back in third. Trained by Mark Bradstock and ridden by Nico De Boinville started joint second favourite, at 7/1, despite his inexperience, to become the first novice since Captain Christy, in 1974, to win the Cheltenham Gold Cup. Favourite Silviniaco Conti was beaten coming down the hill for the final time and trailed in seventh of the 11 finishers, beaten 27 lengths.
at May 11, 2019