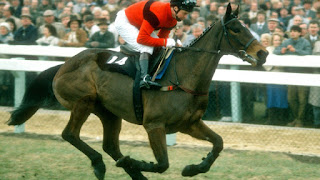 The Cheltenham Gold Cup was first run, as a steeplechase, in 1924, but was switched from its original home, on the ‘Old Course’ at Prestbury Park, to the ‘New Course’, in 1959, marking the start of the modern era.


In any event, the record for the Cheltenham Gold Cup was definitely broken, in dramatic fashion, by The Dikler, trained by Fulke Walwyn and ridden by Ron Barry, in 1973. Barry produced The Dikler with a tremendous late run to overhaul the odds-on favourite Pendil close home, winning by a short head in a time of 6 minutes 37.2 seconds. More drama followed, in 1986, when Jonjo O’Neill galvanised the mare, Dawn Run, to a historic victory over Wayward Lad and Forgive ‘N’ Forget; she not only became the first and, so far, only horse to complete the Champion Hurdle – Champion Hurdle, but also lowered the course record by nearly two seconds, winning in a time of 6 minutes 35.3 seconds.

The next record for 3 miles 2 furlongs and 70 yards on the New Course at Cheltenham was set, on unseasonably fast, good to firm going, by Norton’s Coin. Despite being the longest-priced winner in the history of the Cheltenham Gold Cup, at 100/1, there appeared no fluke about his victory over Toby Tobias and Desert Orchid, a fact that was reflected in his winning time of 6 minutes 30.9 seconds. Indeed, his course record stood for a decade, until fractionally beaten by Looks Like Trouble, who won in a time of 6 minutes 30.3 seconds, again on good to firm going, in 2000.


Once again, the record stood for 11 years and was broken only as the result of a memorable renewal of the Cheltenham Gold Cup in 2011. That year, helped in no small part by a searching, end-to-end gallop, set by Midnight Chase, Long Run defeated Denman and Kauto Star in a winning time of 6 minutes 29.5 seconds, to set a record that has yet to be broken.