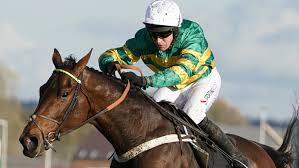 Owned by J.P. McManus and trained by Nicky Henderson, Champ could hardly be in better hands as far as the Cheltenham Festival is concerned. Indeed, the eight-year-old gelding has already appeared twice at the March showpiece, finishing a highly creditable second to City Island in the Ballymore Novices' Hurdle in 2019 and producing a remarkable finishing effort to win the RSA Insurance Novices' Chase in 2020.

On the latter occasion, the son of King's Theatre had fully 8½ lengths to make up on leader Minello Indo from the final fence, but produced a strong run in the final half-a-furlong or so to lead close home and win by a length. Even Henderson was taken aback by the nature of his victory, which he described as 'extraordinary'.

Rated 166p by Timeform, Champ is already a top class steeplechaser, but remains open to any amount of improvement after just four starts over the larger obstacles. He surrendered his unbeaten record over fences when falling at the second-last fence in the Dipper Novices' Chase, also at Cheltenham, on New Year's Day, 2020, but Henderson sees no reason 'why he can't be a Gold Cup horse next season'.

In fact, the Master of Seven Barrows is plotting a similar route to the Cheltenham Gold Cup as he did with Santini in 2019/20, possibly starting with the Future Stars Intermediate Chase at Sandown Park in November. Currently a top-priced 12/1 for the 'Blue Riband' event at Cheltenham next March, and as short as 8/1 in places, Champ remains a bright prospect.