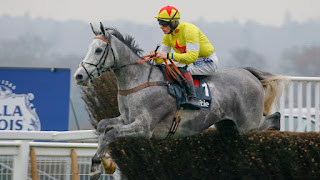 Currently the co-seventh highest-rated steeplechaser in training, according to Timeform, Politologue, now a nine-year-old, has been a regular visitor to the Cheltenham Festival since 2016. However, until March, 2020, the best he had managed in four attempts was a 1¾-length second to Altior in the 2019 Queen Mother Champion Chase.

On his racing reappearance in 2019/20, Politologue was beaten, albeit not far, by Defi Du Seuil, who was in receipt of 3lb, in the Shloer Chase at Cheltenham in November. The pair met again, at level weights, in the Tingle Creek Chase at Sandown Park the following month, with Defi Du Seuil once again coming out superior, to the tune of 18 lengths.

However, following that second defeat, trainer Paul Nicholls contacted owner John Hales and asked permission to send Politologue directly to the Queen Mother Champion Chase without a preparatory run, so that he arrived at the Cheltenham Festival very fresh. Hales agreed and, when March rolled around, Politologue was sent off 6/1 second favourite for the Queen Mother Champion Chase behind Defi Du Seuil, who had since added an impressive victory in the Clarence House Chase at Ascot to his winning tally.

In the hands of Harry Skelton, Politologue was soon jumping well at the head of affairs and drew clear in the closing stages to win, unchallenged, by 9½ lengths. By contrast, 2/5 favourite Defi Du Seuil was never travelling well and trailed in fourth of the five runners, beaten 13¼ lengths, with trainer Philip Hobbs unable to offer an explanation for his poor performance.