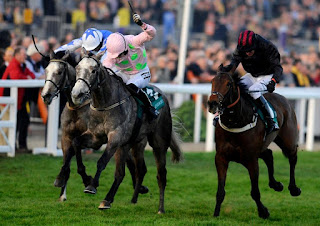 The Champion Bumper is one of four grade one races run on the second day of the Cheltenham Festival. It is a flat race open to horses aged between four and six years competing over a distance of
3,319 metres (2mi 2/2 furlong) on the left-handed Old Course of the annual event’s venue.


This race enjoys a history of around a quarter-century having first been run in 1992. That first event was called the Festival Bumper and it held the same name until 1997 when it was renamed to the
current title. Most race fans of old and official publications still refer to it by the original title though.

Five-year-old horses have proven to be the most prolific competitors here. As of 2017, they had won 15 of the 26 events that had been run. Six-year-olds come second and four-year-olds coming last.
The reason for this could be that most four-year-olds of repute opt to register in other amateur categories like the Fred Winter as they look to rack up experience. The lesser popularity of flat races could also be a big factor.


This race was one of the casualties of the 2001 foot and mouth scare. That cancellation was the only time it failed to take place since its inception.


Willie Mullins is one of the biggest names in the Champion Bumper. He achieved a rare feat when he first came into it, riding self-trained Wither or Which to victory in 1996. He has trained horses
that have gone on to win on seven other occasions. He holds the record of most trained winners (8). He has had another successful partnership with Ruby Walsh. Walsh is the leading jockey in the Champion Bumper with three wins, all won atop Mullins-trained horses. The duo is really cementing their place in the horse racing history! Another one for sore eyes.
at June 08, 2017