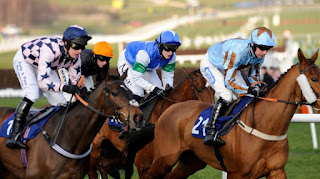 Like the name suggests, this one is a competition for inexperienced horses. It is a grade-3 rated hurdle race that admits strictly four-year-old horses. The novice hurdlers compete over a distance of 3,319 meters (2 mi  furlong), jumping over eight hurdles in the process. The competition takes place on the left-handed, turf layered Old Cheltenham Course.


The race was introduced in 2005 and named in honour of champion jockey and trainer Fred Winter who had a long-running career in the hurdling circles. Fred won a massive 17 races as a rider and had
his trained horses finish 28 times ahead of all others. Amateur jockey Miss Nina Carberry rode Dabiroun to victory in the inaugural race. The race’s popularity grew steadily from when it was first run, culminating in a promotion from Listed level to the current Grade 3 in 2009.


It is a pretty competitive race that no single jockey has managed to win twice over its 13 years’ existence. The £75,000 purse prize also makes it one of the better performing races in its grade. Paul Nicholls is the leading trainer having handled three horses that swept top honours in this race.

The age classification means there are no horses competing twice in the Fred Winter. By the time the festival comes around again, most participants have already moved up from the juveniles to pro
level and are already disqualified by age anyway. The growing popularity of the race as a pro-gauge means most owners are withholding their horses from other events at the start of the year in order to register them here.
at August 03, 2017