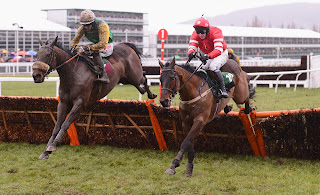 County Handicap Hurdle is a privileged grade 3 race that is run on the final day of the Cheltenham Festival. Five years and older horses compete to complete a distance of 3,240 metres (2 mi 1 furlong) at the New Course of the Cheltenham racing venue. They go through eight hurdle obstacles in the process.


A race now winding down to its century completion, it was first run in 1920. Trespasser, a quite symbolic name in the age of the World War I, zoomed to victory under the guidance of jockey
George Duller.


The race has taken different titles during the time of its existence both in honour of big names in the horseracing industry and as part of sponsorship deals. It was for a long time the closing race of the festival but, since 2009, it is run immediately after the day’s curtain raiser- the Triumph Hurdle.


The race’s popularity is remarkable. Race viewers fill up many of the viewing areas to observe man and beast overcome the daunting hurdles, and a congratulatory cheering roar always meets the winner at the finish line.


The race is regarded as one of the most challenging competition despite being a third-grade race. So much so that no single horse has been able to take first honours twice in this competition since as far back as 1946.


Ruby Walsh and Willie Mullins have again made this their race, dominating most editions since the turn of the 21st century. Ruby Walsh has won the race four times and holds the record of the top
jockey. He rode for trainers Willie Mullins and Paul Nicholls who hold a joint record of four wins ahead of the 2018 event.


This race has had cancellations on several occasions- once for an extended period- for reasons ranging from war, flooding, disease, snow, and frost.
at August 04, 2017