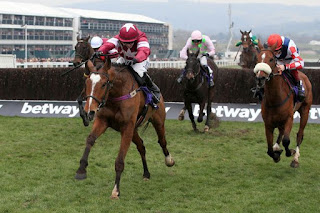 The Old Cheltenham course really does take a serious trotting during the Cheltenham Festival in March. On the second of the four-day event, the RSA chase forms part of the highlight
races that draw multitudes of viewers to the viewing stands.

This is a race category that admits horses aged a minimum of five years competing to round a 4929 metres (3 mi 110 yards) distance with 19 fence obstacles over which the horses jump.
It is listed in the first grade of national Hunt Races.

The race could be affected by a change that is being considered by the Racing association regards
the fence colours. Research suggests that horses are not able to properly see the orange fences. Organisers are mooting the idea of changing the colors to blue or white in upcoming fixtures.

The race takes the name of event sponsor RSA insurance. It has taken different titles to match varying sponsorships since it was established in 1946. The current sponsorship provides a purse of upwards of £150,000 with the winner taking home around £ 85,000. This explains why the race is considered one of the most lucrative Chase races at the Cheltenham festival.

Eleven-year-old Birthlaw was the winner of the inaugural event and remains the oldest racehorse to take first place as at 2017.

The race has been run on all but two years since its inception. The 1947 event was canceled due to frost and snow while the 2001 chapter suffered the same fate as other races after the foot and mouth scare.

The challenging nature of the course and placement of obstacles makes the RSA chase a perfect preparation platform for horses eyeing the festival’s premier event- The Gold Cup. Lord Windermere, winner of the 2014 Gold Cup prepared for the ultimate challenge with an RSA win in 2013 ridden by Davy Russel.

Since Pat Taaffe struck five wins in 1970, no other jockey has been able to achieve the same feat.
at August 21, 2017