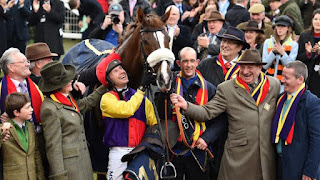 The Champion Hurdle was notable for the victory of Istabraq, who justified odds of 8/15 to win the race for the third year running. Owned by John P. MCManus, trained by Aidan O’Brien and ridden by Charlie Swan, the 8-year-old quickened clear in the closing stages for an impressive, 4-length win over Hors La Loi III. In so doing, he became just the fifth horse – after Hattons’s Grace (1951), Sir Ken (1954), Persian War (1970) and See You Then (1987) – to win the Champion Hurdle three times.


The Queen Mother Champion Chase featured a dramatic finish between Edredon Bleu, trained by Henrietta Knight and ridden by A.P. McCoy, and Direct Route, trained by Howard Johnson and ridden by Norman Williamson. Having jumped well throughout, Edredon Bleu was sent for home with four fences to jump and, although collared on the run-in by Direct Route, rallied bravely to win by a short head, with favourite Flagship Uberalles a further 6 lengths away in third. To add insult to injury, Norman Williamson received a ten-day ban for using his whip in the wrong place.


The Stayers’ Hurdle was won, in workmanlike style, by Bacchanal, owned by Lady Lloyd-Webber, trained by Nicky Henderson and ridden by Mick Fitzgerald. The 6-year-old tackled the long-time leader Limestone Lad approaching the last flight and, despite wandering on the run-in, stayed on well to win by a length.


The Cheltenham Gold Cup had the distinction of being run in a new record time, 6 minutes 30.3 seconds, and was won by Looks Like Trouble, owned by Michael Worcester, trained by Noel Chance and ridden by Richard Johnson. Despite blundering at the tenth fence, the 8-year-old jumped boldly – on occasions, almost recklessly – for most of the way and stayed on gamely on the run-in to beat Florida Pearl by 5 lengths.
at January 18, 2018