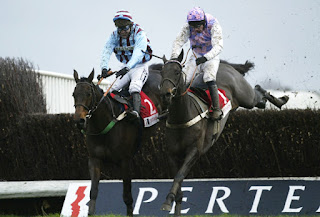 With all due respect to the winner, Hors La Loi III – who’d finished second in the previous renewal, in 2000, prior to the foot-and-mouth crisis – the 2002 Champion Hurdle is best remembered for the wrong reasons. The defending champion, and favourite, Istabraq, who’d won the race in 1998, 1999 and 2000, was pulled up after jumping just two flights and was never seen on a racecourse again, while the second favourite, Valiramix, slipped up when travelling easily after the third last and was destroyed.


Barring the fall of Latalomne, when still in a narrow lead, at the second last, the Queen Mother Champion Chase was fairly uneventful and won, in convincing style, by 7/4 favourite Flagship Uberalles, trained by Philip Hobbs and ridden by Richard Johnson. Native Upmanship, trained by Arthur Moore in Co. Kildare and ridden by Conor O’Dwyer, just snatched second from 66/1 outsider Cenkos, trained by Paul Nicholls and ridden by Ruby Walsh.


The 2002 Stayers’ Hurdle marked the first appearance at the Cheltenham Festival of French raider Baracouda, trained by Francois Doumen, ridden by Thierry Doumen and hitherto unbeaten on British soil. Backed into 13/8 favourite, just ahead of Bannock Bay, trained by Christy Roche in Co. Kildare and ridden by Charlie Swan, at 2/1, Baracouda led soon after the last flight and only had to be pushed out for a clever, albeit narrow, victory over his nearest market rival. It Takes Time, trained by Martin Pipe and ridden by A.P. McCoy finished third, a further 12 lengths away.


The 2002 Cheltenham Gold Cup was notable for the victory of Best Mate, a first winner of the “Blue Riband” event for trainer Henrietta Knight, jockey Jim Culloty and owner Jim Lewis. Having been beaten three-quarters of a length by Florida Pearl in the King George VI Chase at Kempton, Best Mate started only 7/1 third favourite behind defending champion Looks Like Trouble and King George third Bacchanal. However, Best Mate could be called the winner a long way from home, travelling ominously well down the hill before quickening clear in the closing stages to beat the rallying Commanche Court by 1¾ lengths.