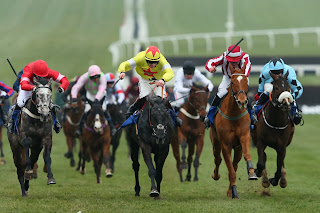 The Coral Cup is one of the low-pressure races at the annual Cheltenham Festival racing event. It is a grade 3 race in the National Hunt listings run on Cheltenham’s Old Course. Horses must be at least four years old in order to be eligible for the Coral Cup.

Eligible horses compete to cover a 4225 metres (2 mi 5 furlongs) in the shortest time possible. The distance is dotted by ten hurdles that require both skill and timing to navigate. The race, though lower grade, provides a considerable degree of challenges and is a great place to spot horses that have the potential to go on and win great things. That it is a handicap race makes it even more challenging.

It was established in 1993 and has retained its name ever since. The famous racehorse Olympian was its very first winner. This earned the competition some very valuable repute. Olympian was awarded a handsome £50,000 for the feat, which was achieved on the back of an Imperial cup win days earlier. Betting group Coral has sponsored all editions of the race and opted to retain the original name even after merging with Ladbrokes in 2015.

At four years, horses that compete in the Coral Cup are almost always looking to move on to bigger second and first-grade races. As a result, most do not enter the competition more than once or twice. This is one of the races that has not been won by a single horse twice since its inception.

The 2008 race was run on the New Course due to the high winds on the usual path. Seven-year-old Naiad du Misselot took advantage of the half-furlong shorter distance to finish ahead of the park. Another notable event was the absence of competition in 2001 when the event was called off due to the incidence of a foot and mouth disease scare.

Despite being open to all horses above four years, five, six and seven-year-olds have been the most prolific competitors.
at March 19, 2018