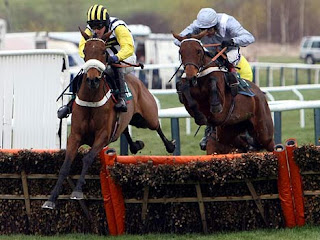 The David Nicholson Mares’ Hurdle is a hurdle race at the Cheltenham festival that is run by mares
of a minimum four years of age. The race was renamed in 2011 to OLBG Mares Hurdle to match the requirements of sponsor OLBG, a betting firm. The trophy, however, retains the original name.

The running takes place over a course distance of 4,005 meters (2 mi 4 furlongs) on the left-handed
turf surface Old Cheltenham Course. The winner takes home a share of about £60,000 from an available purse of £110, 000. This one of the few races that strictly admits female horses.

The race was named in honour of champion jockey and trainer David Nicholson who died in 2006 after a long and successful career in National Hunt racing. It remains one of the youngest Cheltenham festival races, with the first edition having taken place in 2008. In the first edition, it was run on the final day of the Festival but it was later moved to the current slot on the first day. A grade 1 status was achieved in 2015.

Ruby Walsh and Willie Mullin have been the most prolific jockey and trainer in this event
respectively. They swept first place on consecutive occasions between 2009 and 2015 with the peerless Quevega. The mare was one of a kind, showing a renewed level of energy and skill at every new race.

After the 2014 event, Mullins and Ruby went separate ways for this event as Mullins-trained Glen's
Melody won the 2015 race ridden by Paul Townend. The two teamed up again in 2016 when Ruby rode the Vroum Vroum Mag to a resounding victory. The duo does really love the Cheltenham Festival!

They were dethroned in 2017 by Bryan Cooper ridden Apple’s Jade. It might be some while before they land another Quevega but the record set for both men and beast will definitely take some time to break!
at July 02, 2018