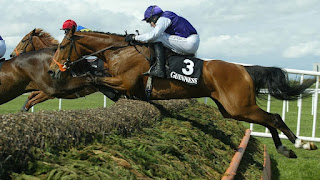 
Defending champion Hardy Eustace proved that his previous victory, at 33/1, was no fluke by justifying 7/4 favouritism, albeit narrowly, at the expense of Harchibald and Brave Inca, who went down by a neck and the same in a thrilling finish. However, the race is equally well remembered for the defeat of the talented, but enigmatic, Harchibald, who was hard on the steel halfway up the run-in, but found next to nothing when asked for an effort by jockey Paul Carberry.


Moscow Flyer, who’d unseated jockey Barry Geraghty at the fourth last when odds-on favourite to win his second consecutive Queen Mother Champion Chase in 2004, made amends. However, it was Well Chief, trained by Martin Pipe and ridden by Timmy Murphy, rather than the 2004 winner Azertyuiop, who emerged as his main rival. The pair was involved in a decent battle over the last three fences, but Moscow Flyer stayed on the stronger to win by 2 lengths, with Azertyuiop, who never really recovered from a blunder at the water jump, 13 lengths back in third.


Newly sponsored by Ladbrokes and renamed the World Hurdle, the 2005 renewal represented the second attempt by Baracouda, the winner in 2002 and 2003, to record a third victory. Francois Doumen’s 10-year-old was all the rage to do so but, despite his best efforts under A.P. McCoy, was “run down” approaching the final flight by the 6-year-old Inglis Drever, trained by Howard Johnson and ridden by Graham Lee, who went on to win by 3 lengths.


The 2005 Cheltenham Gold Cup had the distinction of being the first to be run on a Friday, after an additional day was added to the Festival programme. In the absence of defending champion Best Mate, who was withdrawn a week before the race with a burst blood vessel, Kicking King, trained by Tom Taaffe in Co. Kildare and ridden by Barry Geraghty, was sent off the heavily-backed 4/1 favourite. The King George VI Chase winner took a keen hold, but soon put any stamina doubts to rest, staying on strongly to beat Take The Stand by 5 lengths with Sir Rembrandt 8 lengths further behind in third.