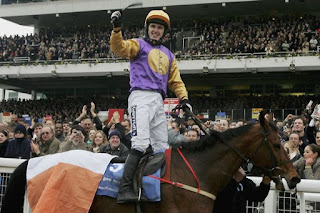 
Brave Inca, beaten just two necks in the 2005 renewal of the Champion Hurdle, returned to Prestbury Park, this time as 7/4 favourite, with A.P. McCoy replacing former rider Barry Cash. Trainer Colm Murphy wasn’t entirely happy with replacing Cash, who’d done all the schooling on Brave Inca, but the decision proved justified because McCoy had to be very strong in the saddle to drive the favourite home by a length from Macs Joy, with defending champion Hardy Eustace a further 3½ lengths back in third.


The Queen Mother Champion Chase was full of incidents and produced a surprise winner, in the form of Newmill, trained by Jonjo Murphy in Co. Cork and ridden by Andrew McNamara. The 8-year-old, only joint-sixth choice of the 12 runners, at 16/1, made virtually all the running and, in so doing, avoided the various calamities happening in behind. Kario De Somain made a mistake at the first fence and unseated his rider shortly afterwards, while favourite Kauto Star fell at the third, hampering Dempsey, who unseated his rider, along with defending champion Moscow Flyer and Watson Lake. Outsiders River City and Oneway blundered and fell, independently, at the fourth last, while Fundamentalist crashed out at the second last to complete the carnage. Meanwhile, Newmill made the best of his way home to win, easily, by 9 lengths and 1½ lengths from Fota Island and Mister McGoldrick.


Stayers’ Hurdle perennial Baracouda, who’d won the race in 2002 and 2003, was back again for another crack, but it was Mighty Man, trained by Henry Daly and ridden by Richard Johnson, who was sent off favourite at 4/1 on his first attempt over 3 miles. Both held every chance, but it was My Way De Solzen, trained by Alan King and ridden by Robert Thornton, and Golden Cross, trained by Michael Halford in Co. Kildare and ridden by Johnny Murtagh – better known as a Flat jockey – who dominated the finish. It was only in the final 75 yards that My Way De Solzen got the better of his rallying opponent, winning by a head, with Mighty Man 4 lengths away in third.


The 2006 Cheltenham Gold Cup was notable for the largest field, 22, for 24 years and the fact that the first three home were all trained in Ireland. War Of Attrition, trained by Mouse Morris and ridden by Conor O’Dwyer stayed on strongly to beat Hedgehunter by 2½ lengths with Forget The Past 7 lengths further back in third. Favourite Beef Or Salmon was a disappointing, trailing in eleventh of the 18 finishers.