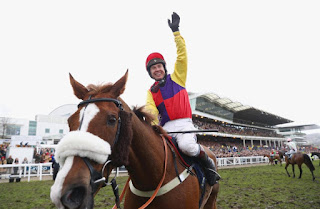 
Reigning champion Buveir D’Air, trained by Nicky Henderson and ridden by Barry Geraghty, started 4/6 favourite to retain his title, but had to work hard to do so, eventually edging out Melon by a neck in a driving finish. Mick Jazz, a 25/1 outsider, finished third beaten a further 3 lengths, but 2015 winner, and 4/1 second favourite, Faugheen, faded between the last two flights to finish sixth of the nine finishers.


Altior, trained by Nicky Henderson and ridden by Nico de Boinville, was sent off even money favourite to win his thirteenth race in a row and did so in no uncertain terms, forging clear for an impressive 7-length win over Min. God’s Own, a 40/1 outsider, rallied to take third, a further 11 lengths away. Douvan, third favourite at 9/2, was still travelling well when falling at the fourth last fence.


Penhill, trained by Willie Mullins and ridden by Paul Townend was returning from a 323-day break, but that didn’t stop the 12/1 chance from winning by 2 lengths, going. Compatriot Supersundae finished second, while Wholestone fared best of the domestic contenders, staying on to take third, 3 lengths further behind. Favourite Sam Spinner could only keep on at one pace to finish fifth, 6¼ lengths behind the winner.


The 2018 Cheltenham Gold Cup had long been billed as a match between King George VI Chase winner, Might Bite, and the previous year’s third, Native River, although late support for Our Duke forced Native River out to 5/1 third favourite at the off. Native River and Might Bite did, indeed, dominate proceedings, with the former making all the running and outstaying the 4/1 favourite in the closing stages to win by 4½ lengths. Anibale Fly, unconsidered at 33/1, plugged on into a never-threatening third, a further 4 lengths away. Our Duke was never travelling after making two mistakes in mid-race and was pulled up at the top of the hill on the final circuit.