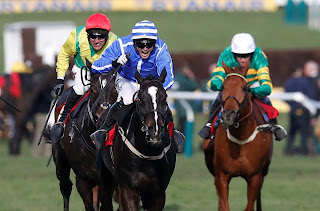 The so-called ‘championship’ races at the Cheltenham Festival are, of course, the Champion Hurdle, Queen Mother Champion Chase, Stayers’ Hurdle and Cheltenham Gold Cup, each of which is considered the apex of its discipline.


In 2019, the betting for the Champion Hurdle was dominated by the defending champion, Buveur D’Air, Apple’s Jade and Laurina, but Buveur D’Air was an early casualty, falling at the third flight, and neither Apple’s Jade nor Laurina troubled the judge. Victory went to the previously unheralded Espoir D’Allen, trained by Gavin Cromwell and owned, like Buveur D’Air, by John P. McManus. Despite having won seven of his previous eight starts over hurdles, Espoir D’Allen started 16/1 for his second attempt at the highest level, but belied his generous starting price by drawing right away in the closing stages for an impressive, 15-length win. Melon, who had been beaten a neck by Buveur D’Air in the 2018 renewal, finished second, so there appears little or no reason to doubt the value of the form.


The Queen Mother Champion Chase was really all about defending champion Altior, who was sent off at prohibitive odds of 4/11 to record his eighteenth consecutive victory, despite racing on unfavourable soft going. Nicky Henderson’s nine-year-old justified favouritism, but had to be kept up to his work from the final fence by jockey Nico De Boinville and crossed the line just 1¾ lengths ahead of his nearest pursuer, Politologue, who held every chance until the final hundred yards or so.


Trained by Emma Lavelle and owned by Andrew Gemmell, who has been blind since birth, Paisley Park was sent off 11/8 favourite to cap a season in which he had improved, by leaps and bounds, by winning the three-mile hurdling championship. Already the winner of four races, including the Long Walk Hurdle at Ascot, all under Aidan Coleman, the stoutly-bred gelding briefly looked in trouble as the field turned for home, but responded well to pressure and drew away in the closing stages to beat Sam Spinner by 2¾ lengths.


Co. Carlow trainer Willie Mullins saddled four in the Cheltenham Gold Cup as he attempted to win the ‘Blue Riband’ event for the first time. He looked as if he might be out of luck again when Kemboy, the shortest-priced of the quartet, landed awkwardly and unseated his rider after the first fence, but it was left to 12/1 chance Al Boum Photo, ridden by Paul Townend, to lift the spoil and, finally, lay Mullins’ Gold Cup ‘hoodoo’ to rest.
at September 17, 2019