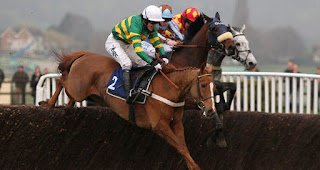 This is a chase race run on the second day of the Cheltenham Festival. It admits horses of age five and above that compete over a distance of 6236 metres (3 mi 7 furlongs) on Cheltenham's Cross Country course. The chase is one of the long races that make up the colourful event and
is popular with fans who love stamina and resilience as they watch competitors clearing a massive 32 obstacles.


The original Cross Country Case was a handicap competition but was changed to a conditions' model in 2016. The condition weighting allows a more uniform distribution of weights hence makes
the race more balanced.


Cross Country chase is the only race of its type run in March, with other similar races happening at the end of the year. It is one of the races that benefited from the expansion of the competition from two to four days. The first edition was run in 2005. 12-year old horse Spot The Difference raced to
victory ridden by amateur jockey John Thomas MacNamara. Spot the difference is one of five horses trained by Enda Bolger that have won the Cross Country Chase.

Despite admitting horses as young as five years old, the race appears to be more popular with the aged and more experienced competitors. The youngest horse that has taken top honours since
its inception was eight years old. Ten-year-old horses hold the record with four wins out of 13 editions. 12, 9 and 8-year olds share a joint three wins.


With a purse of around £50,000, the Cross Country Chase cannot really be ranked among the most lucrative prize-money races. The winner takes home around £30,000. That, however, does not take away any colour from the race that attracts seasoned racegoers and gamblers to the viewing stands in equal measure. There is always the thrill of witnessing the homestretch.